My 5th grade science teacher used to spring pop quizzes on us by pronouncing, “if it looks like a quiz, and it sounds like a quiz, and if it smells like a quiz, then it must be a quiz.”  I’ve recently found myself feeling an unease similar to that experienced by a 5th grader who is unable to remember the order of periodic table elements — except this time the confusion arose while watching Lipstick Jungle.

Actually I felt it while watching an “ad” during the show (the use of quotation marks are the point of this post and therefore will be explained momentarily.)  But first, the troubling stimuli (please excuse the small size and the big “unregistered version” label on the video — I’m trying to find a clean copy, but for now, hopefully you get the gist of it): 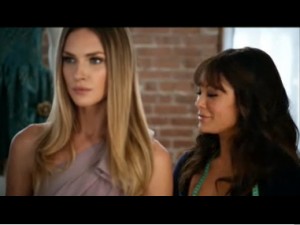 For those of you who aren’t Lipstick Jungle junkies, Victory Ford (yes, that’s her name) is one of the main characters of the show — she is a fashion designer and her character on the show is pretty much like what you see in the video.  During commercial breaks, this and other similar videos run with another :30 Maybelline

So clearly this is an ad for Maybelline, right?  The ad seeks to position Maybelline as a fashion brand.

But doesn’t this also seem like an ad for Lipstick Jungle?  or at least, a lead character in the show?  The ad seeks to position Victory Ford as a fun fashion expert.  After all, the first 25 seconds of the spot are all about her.

So it seems what we’re looking at here is “reverse product placement” — that is, instead of an advertiser placing their product into a TV show, we have a TV show that’s featuring its “product” in an ad.  Interesting, huh?  I have no doubt Maybelline shelled out the dollars for the spot, but the ad seems to be of mutual benefit — so perhaps NBC should have given them a good deal.  Especially because the show really does need some help (in recent weeks ardent fans were able to convince NBC to temporarily reverse its decision to end the series) — so every bit of promotion for the show helps.

With competition for ratings at an all time high, I wonder if we might see more reverse product placements as the networks look for ways to build relationships between their characters and their viewers??  And maybe even some interesting deals to go along with these placements??  Hmmm…