Apple Is the Great Brand of the Year

Thanks to everyone who participated in my recent survey to determine which brand should be named Great Brand of the Year.  The results are in!  You voted as follows: 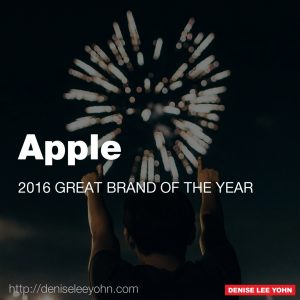 Although the survey is unscientific and Apple beat out its closest rivals by just a percentage point or two, there’s good reason for Apple to be named the Great Brand of the Year.  Among Apple’s accolades and achievements are:

2017 holds the promise of being an even bigger year for Apple, as the iPhone reaches its 10 year anniversary and rumors of its “mixed reality” functionality abound.  For now, Apple is the winner of the 2016 Great Brand of the Year survey.

Everyone who voted and provided their email address was entered to win an autographed copy of my book What Great Brands Do and the winner is Ted Spencer — congratulations!

Thanks again for participating!